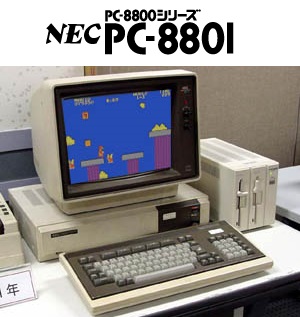 Initially the computer was sold as a business machine capable of a high-resolution 640x400 monochrome display mode (V1) and N mode to make it compatible with the earlier PC-8001. It wasn't until 1985, when the upgraded PC-8801mkII SR version was released with the V2 graphics mode, that the computer was re-positioned as a home machine. Many more video games became available for the computer at this point. The sound was also upgraded from the internal beeper to the Yamaha YM2203 three channel sound chip.

The PC-8801 had several upgrades all the way up to the PC-8801 MC (1989), which came with a CD-ROM drive, and became Japan's top 8-bit computer, helping to establish NEC as the number one company in the Japanese computer industry for almost two decades. Many popular video game series first appeared on the PC-88, including Dragon Slayer, Snatcher, Thexder and Ys.

Here are thirty great games, in alphabetical order, that you can play on the NEC PC-8801. If you wish to find out more details about these games I have provided the original Japanese kanji which you can copy and paste in any search engine to get even more results. You can also play these games on a PC using one of the following emulators found here.


Notable for its epic, cyberpunk, space opera narrative, which surprised players at the time with unexpected plot twists.It featured several plot elements that would later carry over to the Final Fantasy series, such as a heroine who suffers from amnesia and a rebellion against a corrupt repressive government.


A top-down action game that plays like a tactical version of Commando. The 'almost' turn-based element of the game means bullets and the various types of enemy units, such as soldiers, tanks, planes and helicopters, only move when you do.


An occult-themed RPG, Based on a novel by Aya Nishitani, and the first game in the Megami Tensei franchise. It introduced many of the elements the series is known for such as demon bartering and fusing. Although the novel is the first part of a trilogy, future games in the series spun off in their own direction.

A 3D, first-person, role-playing shooter, Ahead of its time, it was an early example of both the Action-RPG and FPS genres. The player can choose one of three cities to explore along with its colour scheme and enemies. The game uses monochrome 3D polygon graphics to represent city buildings.


A dungeon-crawling, arcade platformer which was one of the first action games with RPG elements. It also featured several other firsts in gaming history like the double-jump, the life meter, and the hub world map.


Credited for pioneering the action RPG genre. It was entirely real-time, with action-oriented, hack & slash, real-time combat. In some ways, the foundations of Dragon Slayer's action RPG gameplay can already be seen in Yoshio Kiya's previous game Panorama Toh.


Unlike most of the Hokuto No Ken games which were mostly side scrolling beat-em-ups, this was an adventure game about finding the bad guys and defeating them. The twist, concerning pressure  points, being the player can only kill the main enemies by finding and talking to the villagers to find out information about them.


A multi-directional shooter where you have to transport a mobile base through hostile terrain. The base itself can fire unlimited short range missiles but is limited in its movement. The player has a jetpack with limited fuel and limited long range missiles. To re-fuel and re-arm the player must return back to the mobile base. In ceoncept this reminds me a bit of Ultimate's Lunar Jetman on the ZX Spectrum.


An RPG which introduced a morality meter, Killing humans or good monsters lowers the player's morality, while fighting evil monsters increases it. If the player has an evil alignment, the negative reputation will lead to the townsfolk ignoring the player, denying access to certain clues, dialogues, equipment, and training. The game also introduced a time option, allowing the player to speed up or slow down the gameplay.


A vertical platform game where the player controls a hammer wielding Eskimo who has to climb 32 ice-covered mountains in order to recover a stolen vegetable from a giant condor. This was actually a launch title for the NES in North America.


This game, designed by Yoshio Kiya, combined RPG gameplay with real-time combat, fantasy with sci-fi elements, introduced a persistent open world with day-night cycle and survival mechanics. He would later go on to create the seminal Dragon Slayer, the game which laid the foundations for the real-time, action RPG genre.

A vertically scrolling shoot 'em up with real time 3D flat-shaded polygonal graphics which were very advanced for their time. The game was praised for being highly addictive and extremely colourful.


A Hideo Kojima cyberpunk text-based adventure game set on the artificial island of Neo Kobe in 2046. As futuristic elite police task force rookie Gillian Seed the player must uncover the mystery of the Snatchers, cybernetic terrorists that kill humans and steal their appearance. The game draws heavily from popular science fiction movies such a Blade Runner, The Terminator and Aliens.


An action RPG considered unique for its party-based action combat, magic combination system, and open-ended multi-scenario system that could be extended with expansion packs.

An early RPG based on the Mission: Impossible franchise and notable for its modern day setting rather than the traditional fantasy setting of other RPGs.


Combines the elements of an adventure game with a shoot em up. It's a great idea and a half decent game but the shoot em up part of the game lets it down.

A sequel to Super Mario Bros. and a prequel to the lost levels. Mario explores the 32 all-new levels one screen at a time finding enemies from three of his earlier games, power-ups new and old, and more traps and puzzles.


One of the first RPG hits in Japan selling over 150,000 copies. Voted in one Japanese magazine as Game of the Year. Became the most successful Japanese computer RPG of the year (1984) and sparked an increased interest in RPG's in Japan. One of the first games to introduce a health bar for hit points too.


Squaresoft's first game, designed by Hironobu Sakaguchi. A text-based adventure game with graphics for locations, people, and objects.Different routes through the game are available to the player adding some replay value. It sold over 500,000 copies, more than any other game released at that time. Spawned a sequel, Will: The Death Trap II and what many see as the third in the trilogy, Alpha.

A Metroidvania-style open-world exploration, side-scrolling, run & gun shooter in a large game world of more than 500 screens also known for its chiptune music by Yuzo Koshiro.


A massively popular action shooter featuring a giant robot, which can transform into a jet, trapped inside a computer facility consisting of sixteen maze-like levels. The aim being to survive long enough to destroy the central computer. It sold over 500,000 copies in Japan and was so popular that Sierra On-Liine licensed it for release in the USA. It became a best seller, selling over one million copies worldwide, and a breakthrough title that paved the way for the likes of Contra, Metal Slug and other games of the genre.


An unusually deep side-scrolling adventure platformer where the player (he or she) has to rescue a princess. There are many opportunities to buy a wide range of items to help the adventurer and many side-tunnels and dungeons to explore on route to the main objective. It also has an interesting feature where the player can use an item in each hand with the use of the item sometimes changing depending on which hand is holding it.

An action RPG where the player travels around a map, defeating monsters and solving puzzles. NPCs, keys and other objects need to be found to get into the final room of the map where the level boss can be found. Once the boss is defeated the player can move onto the next map.


A controversial action RPG with reference to religion, politics and drugs. You play the part of Sadler, a Syrian assassin, who must complete tasks in various areas of the Middle East including Baghdad, rescuing a girl from prison, Isfahan, buying someone from a circus and Babel, searching for unicorns. More modern day missions involve assassinating the American president and the Russian General Secretary. This game was never released  outside of Japan.


XZR II (Aka. Exile) is the sequel XZR. This time Sadler travels around various countries throughout the world trying to find missing holy artifacts. France, India, Cambodia and Japan are on the list this time along with a spot of time travel to the garden of Eden, Manhatten subways, The Rockefeller Centre and The UN Headquarters. Its similar to the first game but much more polished. Censored versions were also released on various consoles in North America.


The first Ys game, notable for being one of the earliest story-driven Japanese RPGs with many NPC's, goals and side quests acting as plot elements. Previous to this RPG's just had a introductory story followed by fighting, puzzles and end of level bosses. The ease of play made it more suitable for beginners than most other RPGs that were released at the time.


A sci-fi graphic adventure set in a post-apocalyptic future with a text-parser interface and day-night cycle that impacted the story, where specific events might only occur at certain times. It's anime-style pixel art graphics were also detailed for the time,

A platform-action RPG where the player controls the knight, Duke Garland, whose task is to save Zeliard by destroying the evil overlord Jashiin, the Emperor of Chaos, who cursed the kingdom by causing a sand rain lasting 115 days and turning the beautiful princess Felicia to stone. To break the curse Duke Garland must recover the Nine Tears of Esmesanti, magic jewels. Each tear is held by an end of level boss, the final boss being Jashiin himself.


The next Retro Japan Computer Special will be all about the Fujitsu FM-7 and its games.

Please don't forget to visit my other blog, My CAVE 33, which is having a Retro Japan Computer Special of its own this month, revisiting Japanese computer games and hardware advertising from the early eighties.

Snagultoof
Originally from Derby in the UK. Now living in Indonesia with my wonderful wife and amazing little boy. Life is sweet.